Whether you’re chasing a place on the podium, or on a mission to become an elite tactical professional, the ambition to succeed can be all consuming.

Such was the case for Kyle Mullen who wanted nothing more than to become a Navy SEAL.

This 24-year-old arrived at the SEAL selection course in mint condition in January of this year.

Despite being captain of Yale’s football team, for the SEALs Hell Week he’d made himself fitter, stronger, and better mentally prepared than he ever was in his life.

The New York Times reported that by the middle of the third week he looked set to make the cut, after all 189 men had dropped out of a field of 210 starters.

When Kyle left the cold Pacific Ocean, he was told to get some rest and when he closed his eyes his heart stopped, and he passed away.

It’s no secret that during HELL Week hospitalizations were common and since 1953, 11 men have died.

Bacterial pneumonia was the official cause of death, but there was something else potentially at play.

Syringes and performance enhancing drugs were found in Kyle’s car. Many candidates admit to taking supplements and drugs to get them through the week. In fact, a week after this event occurred the SEALs began testing candidates and out of 1,250 tests 51 candidates have been removed.

The same thing happens in many sports throughout the world where the drive to succeed is high.

However, you don’t need to be SEAL-level obsessed to be taking supplements that could lead you to inadvertently fail a drug test as a first responder or tactical professional.

Often, regular supplements can be contaminated by banned substances.

Fortunately, you don’t have to let your supplement routine be a roulette wheel of uncertainty.

If you want to make it easier to make good product decisions, there are shopping shortcuts available to you. Third-party certification can do your research for you.

Buying a brand that’s reputable is usually a good sign, but if they’re third party certified then you’re truly covering all bases. It’s like an extra set of eyes examining products to verify product quality and test for banned substances.

To keep yourself safe, choose products that have a third-party seal like the Banned Substance Control Group (BSCG) Certified Drug Free seal.

The BSCG Certified Drug Free program helps to ensure products are free of banned substances in sport and other potential drug contaminants, verifies that products meet label claims and are free of environmental contaminants, and evaluates compliance with Good Manufacturing Practices (GMP) and other regulations.

Not only are you making sure you get the best quality products and ingredients, but you safeguard yourself against a failed drug test and unscrupulous new ingredients.

Every lot of BSCG Certified Drug Free supplements are tested for 505 drugs including 296 drugs on the WADA Prohibited List and 209 OTC, illicit, or prescription drugs – the most comprehensive testing menu in the realm of third-party certification for banned substances.

This offers maximum protection against hidden risks of dietary supplement contamination and protects you from a failed drug test, leaving you to do serve with confidence. 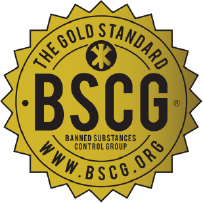