New Year Predicament: Follistatin Now Both a WADA Prohibited Substance and a Supplement Certified for Sport

With the onset of 2019, a new WADA Prohibited List has taken effect. The new myostatin inhibitor language is perhaps the most significant change and has great potential impact on the nutrition and sport drug-testing industries, as we discussed in depth in October. Agents that may reduce myostatin expression are now considered banned, including specifically follistatin. Follistatin may be both prohibited and perhaps recommended in the form of a dietary supplement that is certified as safe for athletes. Other popular supplement ingredients that contain epicatechins, like green tea extract or cocoa extract, may also be interpreted as prohibited myostatin inhibitors. 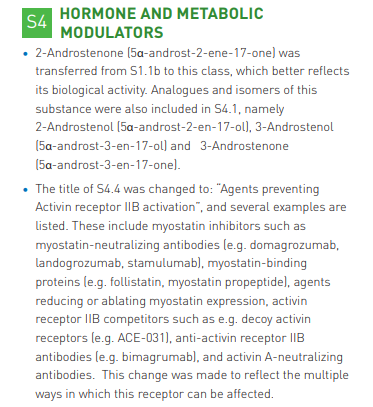 The dilemma specific to myostatin inhibitors confronts athletes, nutritionists, third-party dietary supplement certification programs, and anti-doping policy makers. It demonstrates how difficult it can be to interpret what does or doesn’t qualify as a prohibited substance.

Follistatin, which is present in fertilized chicken embryos, is now used as a supplement ingredient. Other compounds like epicatechin, common in the nutrition industry in the form of green tea extract and cocoa extra, have been studied as potential myostatin inhibitors. It is unknown whether epicatechin will be considered prohibited so that question remains open for consideration, but not so with follistatin.

The specific prohibition of follistatin presents another dichotomy. In April of last year, Myos Rens announced that their Yolked ™ supplement was NSF Certified for Sport ®.  NSF’s supplement certification program is recommended by a number of sport organizations subject to drug testing, according to NSF’s website. [1] NSF’s online database shows that the Yolked ™ product is currently NSF Certified for Sport ®. The primary ingredient in Yolked ™ is Fortetropin ®, which consists of follistatin. Follistatin is now specifically prohibited by the 2019 WADA Prohibited List, but because it is certified it may also be inadvertently recommended by sporting organizations or considered approved by athletes. 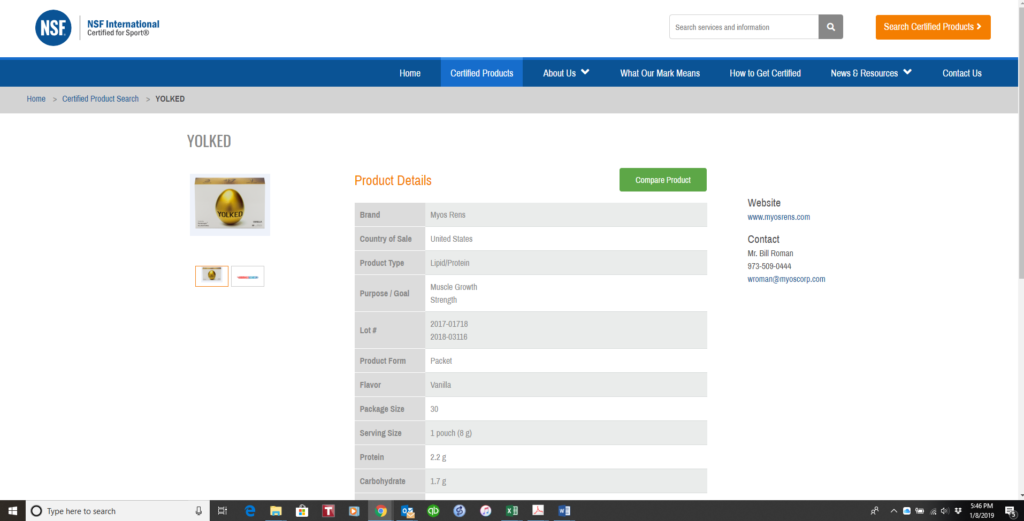 Since not all sport leagues or organizations adopt the WADA Prohibited List language as written, it is worth exploring further to see how myostatin inhibitors, follistatin, or other potential myostatin reducing agents may be treated across various groups. The answer depends on how the language in the respective prohibited substance lists is interpreted.

CCES: The Canadian Centre for Ethics in Sports was “born out of a landmark merger between the Canadian Centre for Drug-Free Sport and Fair Play Canada,” according to its website. It works “for, and on behalf of athletes, players, coaches, parents, officials and administrators.” CCES accepts the WADA Prohibited List language as written and communicates it to Canadian athletes.

CFL: The Canadian Football League Prohibited Substances List is available for download. The list includes a category for “Hormone and Metabolic Modulators,” the same category WADA places myostatin inhibitors. The CFL list, however, does not specifically mention myostatin inhibitors, nor does it include related substance language for the category. So, myostatin inhibitors may not be prohibited in general, and it is not clear how follistatin or other potential reducing agents would be treated.

CPSDA: The Collegiate and Professional Sports Dietitians Association is an independent not-for-profit organization. The CPSDA statement of purpose indicates that the “Collegiate and Professional Sports Dietitians Association (CPSDA) represents the vast majority of advanced practice registered dietitians in the United States who work full-time with athletes in colleges, professional sports, Olympic training centers, the U.S. Military and in law enforcement.” The prohibited list of relevance to CPSDA members depends on who they work with; for some, myostatin inhibitors like follistatin are clearly prohibited, while for others they may appear to be recommended or approved in the form of the Yolked supplement.

LPGA: The Ladies Professional Golf Association 2018 LPGA Prohibited Substances list includes “Hormone and Metabolic Modulators” with sub-item 4 covering “Agents modifying myostatin function(s) including, but not limited, to: myostatin inhibitors.” This language is the same as the 2018 WADA Prohibited List. The 2019 LPGA list does not seem to be available yet so it is not known how follistatin will be treated. If the LPGA follows the WADA changes, follistatin and other mysotatin reducing agents will be prohibited.

MLB: Major League Baseball provides the MLB Prohibited Substances List online, which remains relevant through 2021. It includes “Myostatin Inhibitors” under number 68. No examples are provided. If WADA now interprets follistatin to be a specific example of a myostatin inhibitor, MLB should also interpret follistatin or other reducing agents as prohibited–but this is not clear.

NCAA: The National Collegiate Athletic Association 2018-19 NCAA Banned Drugs list is not an exhaustive list and only includes examples of drugs in certain banned categories. Category “f Peptide Hormones and Analogues” is included with examples listed coming from the similar WADA category S2. There is no category, however, for Hormone and Metabolic Modulators wherein WADA includes myostatin inhibitors. It is uncertain whether follistatin or other myostatin inhibitors would be banned in the NCAA.

NFL: The National Football League List of Prohibited Substances includes a category for “Protein and Peptide Hormones” but does not include language indicating that “other substances with a similar chemical structure and similar biological effect(s)” may be prohibited. The list is specific and myostatin inhibitors do not appear to be included. The NFL does ban “gene doping,” and in that section they include compounds from WADA category S4.5 Metabolic Modulators, but none from category S4.4 where myostatin inhibitors are listed. Since the injection of follistatin AAV1-FS344 may be considered gene doping, it is possible follistatin in one form could be interpreted as prohibited but myostatin inhibitors or their reducing agents do not appear to be covered in general.

NHL: The National Hockey League list of prohibited substances is not available to the public. A note on NHL.com reads as follows: “The joint Committee… will agree on a Prohibited Substances List. The list will include performance-enhancing substances on the list maintained by the World Anti-Doping Agency (WADA) for both in-competition and out-of-competition testing.” It does not clarify that all WADA Prohibited Substances are banned. So, it is possible that the new 2019 WADA Prohibited List language for myostatin inhibitors would be relevant within the NHL but this is uncertain.

Consideration of follistatin, and myostatin inhibitors in general, as prohibited substances in sport reveals surprising dilemmas that need to be addressed and resolved. This review demonstrates the extraordinary complexities faced when trying to set or interpret the confines of anti-doping policy. In these modern times you would think the outlines of prohibited substances would be consistent but that does not seem to be the case with follistatin, or myostatin inhibitors in general.

We believe there should be consistency in prohibited substance list language, so that predicaments like these can be avoided. In our earlier blog post, BSCG suggested possible prohibited list language adjustments to address concerns over follistatin and other myostatin inhibitors. Hopefully the sporting community will consider and implement workable solutions soon as athletes and other professionals deserve clarity as to what does or doesn’t qualify as a prohibited substance.

[1] The NSF Certified for Sport® website includes the following on its homepage: