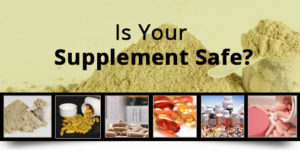 Third-party dietary supplement certification is a vital consideration for athletes today. Modern sport drug testing methods can find drugs in urine at ultra-low levels (parts per trillion). Athletes’ careers, livelihoods, and reputations can be derailed by inadvertent consumption of a drug in a contaminated supplement. A handful of dedicated third-party certification programs, including BSCG Certified Drug Free®, Informed Sport/Choice, and Cologne List, have risen internationally to offer testing programs designed to ensure that supplements are free of substances banned in sport. Yet, not all programs deal with the presence of banned substances in the same way. It appears one leading certification provider, NSF International, employs a risky practice where allowable levels of performance enhancing drugs are permitted in NSF Certified for Sport® supplements.

NSF’s adoption of a “maximum allowable level per serving” practice runs counter to a central tenet of modern sport drug testing—strict liability—which mandates that an athlete is responsible for any amount of a banned substance found in their system regardless of how it got there. Drug-testing programs allow for limited exceptions in instances of certain health conditions divulged prior to a competition with a Therapeutic Use Exemption (TUE) or for naturally present threshold substances, etc.

Furthermore, a lack of transparency in NSF’s approach to listing certain certified products in the NSF Certified for Sport® database adds to the concern. The NSF banned substance certification guideline redefines the word “all” to describe discretionary testing of finished product lots. Together, these two practices could expose athletes, consumers and supplement brands to unexpected risks.

‘Maximum Allowable Levels’ of Drugs are Problematic for Athletes

The details regarding the NSF Certified for Sport® approach hide deep within its certification process and are not explained on their websites. The NSF Certified for Sport® Annex B testing menu previously available through a tiny link buried in the layers of the larger NSF International website was recently removed. That testing menu link revealed an interesting reality, now only accessible in the company’s banned substance guidelines.

When it comes to reporting positives in the realm of dietary supplement certification, NSF employs an approach no other third-party certification uses: “a maximum allowable level” per serving concept. Other major groups—BSCG Certified Drug Free®, Informed Sport/Choice, and Cologne List—by comparison, establish a detection level or reporting level above which positives are called and products are not certified, except in rare cases.

Stated more simply, most programs have a black and white reporting threshold for the presence of banned substances, whereas NSF (which many athletes and sporting associations rely upon) has an allowable range in which banned substances can be present. This creates a grey area that would seem to subject athletes to potential inadvertent doping violations.

Four out of five third-party dietary supplement certification providers offer detection levels in the parts per billion range, or ng/g. This is important because even these trace amounts of banned substances in supplements can lead to a positive drug test for the more than 80% of the drugs on the WADA Prohibited List or professional sport banned substance lists for which no urine threshold is applied. For these drugs, any presence in urine, even at parts per trillion levels, would constitute a positive.

NSF’s technical details included in its “NSF 306 – 2016 Certification Guideline” for Certified for Sport® program reveal report thresholds that are in the low parts per billion, which are appropriate. What is problematic, however, is NSF’s application of a secondary threshold they call the “maximum allowable level per serving,” which is listed in parts per million. In practice, this means that they may detect performance-enhancing drugs in a product above the report threshold but still certify it if the amount is below this second threshold. They have a maximum allowable level per serving for every drug in their menu.

In a recent NCAA positive drug test case, 50 picograms per milliliter of clomiphene in urine was responsible for a student athlete losing his scholarship and a year of eligibility. NSF’s maximum allowable level for clomiphene in supplements is listed as 200,000 picograms per serving.

Permitting performance-enhancing drugs to be present in supplements is concerning. Such a policy puts leagues, athletes and participating brands at risk as there is a real possibility that trace amounts of banned substances could be present in NSF Certified for Sport® products. Indeed, NSF testing reports exist that indicate multiple drugs as present in several different products yet the conclusion of the reports state that, “the amounts observed are acceptable and would not be perceived as a risk to an athlete.”

The NSF approach would seem to be re-writing some of the central tenets of anti-doping policy and scientific principles. Any reputable sport drug-testing educational system today preaches strict liability to athletes. Yet NSF dictates that certain amounts of banned substances are allowed. These policies are not congruous.

Now, if you were to set out to calculate a maximum allowable level, it would have to be per day, not per serving. To start your calculations, first you would need to have a urine threshold for the drug involved. There are only urine thresholds used for less than 20% of the drugs in the sport drug-testing system, there is no minimum threshold for the other 80+%. Second, you would need some sort of urine excretion study to evaluate the clearance time for the drug and demonstrate that the maximum allowable levels would not result in a positive drug test.

Few such studies are available across the spectrum of prohibited substances in sport. If pursued independently, these would have to be done carefully and robustly in order to justify allowable thresholds for each drug, and even then risks would likely remain given the complex and varied metabolism of the human body that can be difficult to capture in small population studies. These studies would also be static in time.

WADA Technical Document – TD2017MRPL outlines the minimum required performance limits (MRPLs) for WADA labs, which provide testing for the bulk of professional, collegiate and Olympic sport. This document states, “The MRPL is not a threshold (T) nor is it a Limit of Detection (LOD). Adverse Analytical Findings may result from concentrations below the established MRPL.” It goes on to say, “A confirmed identification of a Non-Threshold Substance at any concentration shall be reported as an Adverse Analytical Finding, with the following exceptions,” of which there are few. Perhaps NSF mistakenly considered the MRPLs to be urine thresholds and used these as a starting point.

The maximum allowable level concept does not comport with FDA regulations either, which do not permit allowable levels of drug contamination to be present in dietary supplements. In fact, the FDA has taken action against supplement companies even in situations where trace amounts of drugs were found. So, NSF’s practice in this arena would seem to diminish the regulatory protection brands deserve from third-party certification.

In theory, isolated situations exist where a maximum allowable level could be considered for a few compounds: for example, the natural endogenous androstenedione that may be present at small amounts in dairy-derived products. Doing so on a broader level, however, is dangerous when it comes to dietary supplement certification for performance-enhancing drugs. The ramifications of a miscalculation in the science used to attempt to justify such levels are simply too great.

Testing of Batches Needs to be Represented Accurately

The second concerning practice NSF currently employs is how NSF publicly represents which batches are certified and how these are listed in their databases. Most athletes these days are urged to use a supplement that has been certified by a third-party. The counseling often includes an instruction to verify that the lot number on the package is in the third-party database to ensure the protection applies to that particular lot. Every third-party supplement certification provider other than NSF makes each finished product lot number available online.

What does NSF do? For many of their larger brands the word “all” appears in their database. To any casual observer, including an athlete, this would suggest that any lot of that product purchased in a retail or online establishment has been tested. Yet that is not the reality if you explore NSF’s technical details.

In fact, they have redefined the word all on page A24-25 of their “NSF 306 – 2016 Certification Guideline” in such a way that no consumer or athlete would understand. This definition is not disclosed anywhere on their database or websites to alert users to the reality of how frequently product lots are tested. NSF’s 306 – 2016 Certification Guideline reads in relevant part:

Product sampling and testing frequency is dependent upon the amount of lots produced per company for all participating products. NSF reserves the right to require a predetermined testing scheme on a case-by-case basis including but not limited to the following examples:

This will consist of testing customer-chosen lots – those lot numbers will appear in Official Listing, once they have passed the full testing and approval process.

All lots of the specific Certified product shall be tested, or NSF may determine a set number of randomly sampled lots that shall be tested (based upon the number of lots produced per year) in order to meet this requirement.

Using the word all to describe protection for supplements where it appears only a subset of finished lots may actually be tested misrepresents the protection afforded for certain brands and products.

When you dig further and explore an earlier edition, the “NSF 306 – 06 Certification Guideline,” you find a previous version of the sampling frequency section that outlined examples of what NSF’s discretion to “determine a set number of randomly sampled lots” might mean. Table B on page 30 shows three examples where some companies have to test 100% of finished product batches, some 30%, and some only 2.6%!

Could it be that the word all now represents testing of what could be as few as 2.6% of finished product batches? That information is not known to the supplement industry, consumers, or the professional, Olympic, and collegiate athletes that rely on the protection the NSF Certified for Sport® program is supposed to impart on products.

With big challenges presented in testing hundreds of different and varied supplement matrices effectively at trace levels, certification of supplement products is not a simple endeavor. Due to the inherent difficulty of the task, no certification program can provide 100% guaranteed protection. Despite these challenges, third-party certification programs should be committed to ensuring products are free of banned substances and offer transparency to help athletes and consumers understand what protection they are getting.

All dedicated third-party certification providers should deliver the level of protection that athletes, consumers and responsible supplement companies expect and deserve. Hopefully, the facts shared here can serve as valuable education to interested stakeholders and will help strengthen the industry of third-party dietary supplement certification for banned substances.

Clarification:
NSF’s maximum allowable level for clomiphene in supplements is listed as 200,000 picograms per serving, not 200,000 parts per trillion per serving, as originally stated. (3/8/18.)